DUBAI, UAE, 27 September 2022: Transforming the business of fun since 2001, Embed, the ultimate cashless solutions provider for the amusement, entertainment, and leisure industries wowed customers and prospects with breakthrough innovations at the IAAPA Expo Europe show in London, United Kingdom from September 13 to 15.

Transitioning from Coins to Cashless, One FEC at a Time
As per market research, the European FEC equipment market size is expected to reach US$ 755.03 million by the end of 2025. In step with the growing family entertainment center market in the UK, the Embed Mavericks showcased the products that comprise the ultimate cashless system: the award-winning Mobile Wallet, kiosks, card readers, game cards, and RFID wearable media - which were exhibited in the famous Bling Trunk.

“It was an exciting time seeing the family entertainment center sector in Europe growing at such a fast rate, readily embracing cashless solutions like our tech of transformation that propels FECs to the future. We have front-row seats experiencing this at tradeshows like IAAPA Expo, and it’s evident that there is now a massive comeback in the industry based on this year’s attendance,” says Renee Welsh, CEO at Embed.

Here are some notable highlights from this year’s show:

Back-to-back Media Coverage
Embed and its official distribution partner, Bandai Namco, had an interview with InterGame about their long-standing relationship in the industry and in EMEA. Veltmeijer Group, one of the biggest FEC players in the region, also talked about adopting Embed’s Mobile Wallet solution in an in-depth discussion with Blooloop. 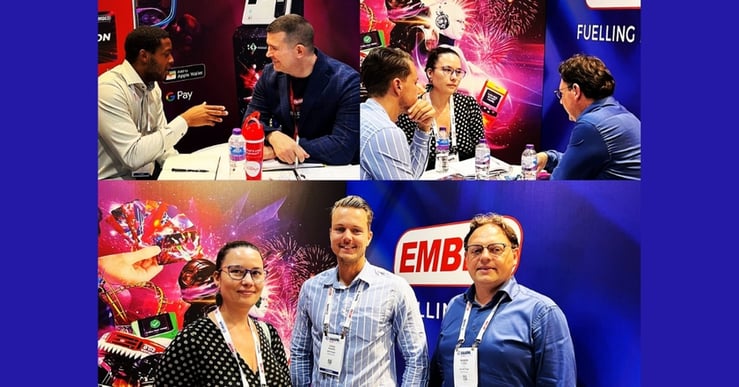 Meaningful Meetings
Customers, who are Embed partners and friends, like Funstation, Bandai Namco – Church Farm, Planet Arcade Germany, and Adventure Island graced the Embed booth to catch up, talk about the latest breakthrough innovations, and discuss how to make the best out of their existing system.

What’s Next?
Embed will champion its latest tech of transformation at the upcoming IAAPA Expo Orlando on November 15 to 18. Trade show goers can expect the launch of a new roster of industry-firsts designed to propel businesses to become an FEC of the Future. Schedule a meeting here in advance.

Sharing our knowledge to help you enable your business of fun.

see all
Tweets by EmbedCard

SINGAPORE, 3 November 2022: Today Embed, the ultimate cashless solutions provider for the amusement, entertainment, and leisure industries, is launching the new technology insights data visualization dashboard, STATS, at the IAAPA Expo Orlando from November 15 to 18. Developed with and powered by Amazon Web Services (AWS), this solution helps family entertainment centers worldwide transform guest experiences using data. In its commitment to technology innovation, Embed has been launching industry-firsts for more than 20 years to enable, empower, and ease the business of fun. For example, its Mobile Wallet virtual game card launched in 2019 remains the only non-banking, non-finance, and non-loyalty brand to sit in customers’ Apple Wallet or Google Pay.

SINGAPORE, 3 November 2022: Amazon Web Services (AWS), an Amazon.com company, today announced that Singapore’s Embed, the worldwide leader in cashless business management systems and solutions for the amusement, entertainment, and leisure industries, with 1,000 customers operating 3,000 installations around the world, has developed an industry-first data visualization platform on AWS. The STATS insights platform makes understanding venue operations easy and engaging by leveraging AWS to visually present data, including arcade game performance and guest activity, from points of sale, gaming rooms, and kiosks. This data helps family entertainment centers (FECs) like arcades, amusement centers, and theme parks better understand their guests’ behaviour and improve the guest experience. With the breadth and depth of AWS services, including databases, analytics, and networking and content delivery, the STATS Software-as-a-Service (SaaS) solution allows FECs to generate reports from nine dashboards on the performance of their venues. For example, with STATS, FECs can forecast game demand and revenue to optimize game offerings and promotions, and drive staffing and inventory efficiencies across multiple locations.